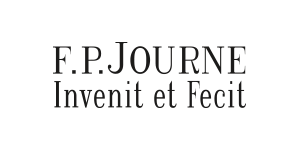 F.P. Journe is a high-end watch manufacture of Switzerland named after the founder François-Paul Journe. The motto of the brand, Invenit et Fecit (Latin for “[He] invented it and made it”) denotes that the company builds the entirety of the watches. Journe often designs brand new movements, even inventing completely new systems, like the resonance chronometer.