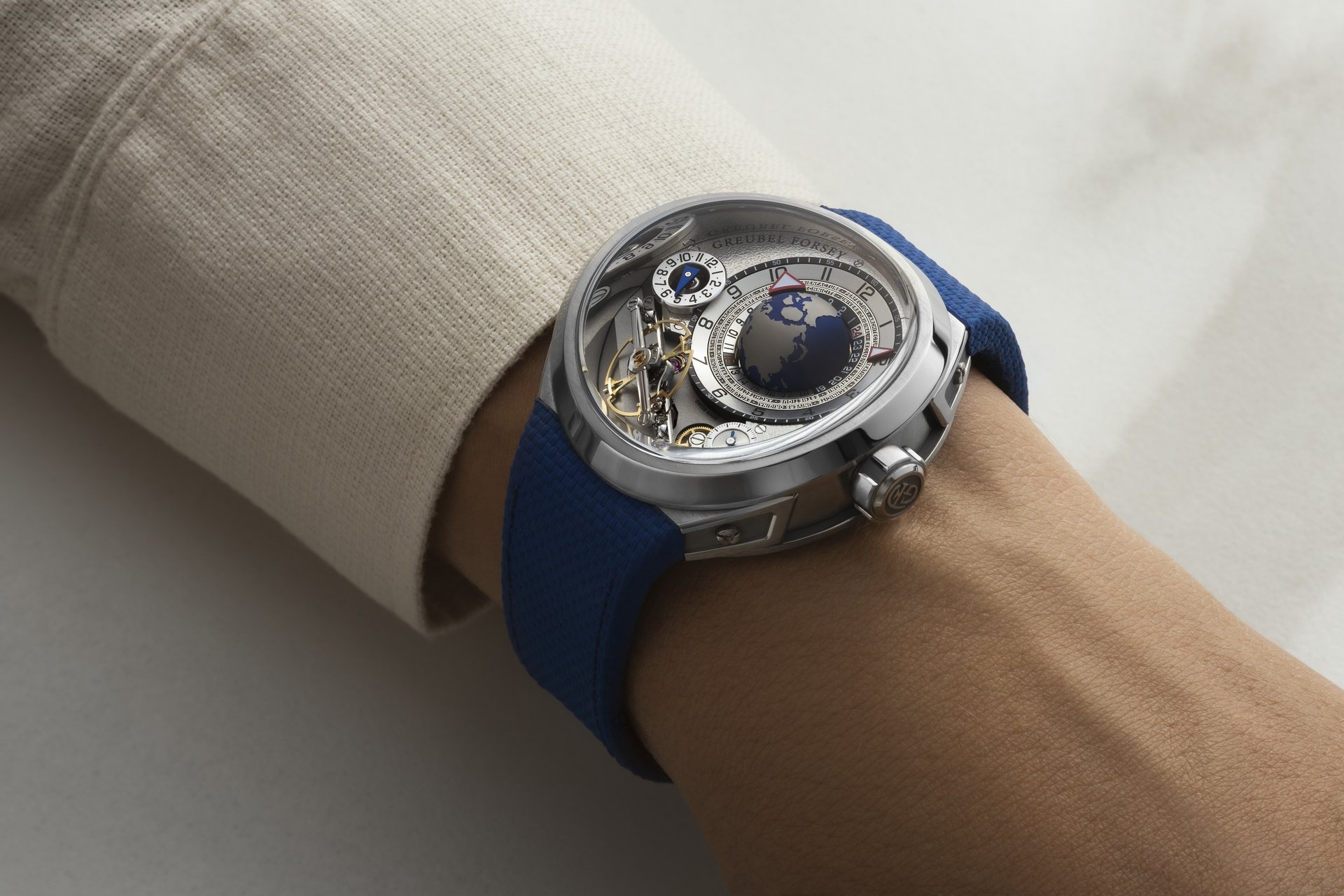 Could this be a return to geocentrism? With the new GMT Balancier Convexe, Greubel Forseyplaces the Earth back at the centre of its universe.
This new GMT calibre replaces all previous GMT models and features, for the first time, its signature inclined balance wheel, as if in orbit around the Earth.

A construction whose aesthetic architecture is matched only by its technical mastery and which confirms Greubel Forsey’s resolutely contemporary approach to Fine Watchmaking.

The Earth may no longer be the centre of the universe, as thought by Aristotle through Copernicus, but it is at the centre of Greubel Forsey’s new GMT Balancier Convexe. The perfect titanium sphere with its continents, seas and oceans, is one of the Atelier’s most emblematic creations. It was the centrepiece of the GMT, GMT Earth, GMT Quadruple Tourbillon and GMT Sport, some of Greubel Forsey’s greatest successes to date. Today, Greubel Forsey is dedicating a brand new
calibre to the Terrestrial globe, decisively replacing its predecessors. It is the purest and most contemporary interpretation of the GMT complication ever imagined, deeply rooted in the universe of the brand as well as in Haute Horlogerie .

The Earth is showcased majestically, positioned at the very heart of an amphitheatre-like construction. Flush with the sapphire crystal, almost close enough to the surface to touch, it moves in a constant 24-hour rotation, just as the Earth rotates in real life. This amphitheatre is bordered by three rings which indicate two complementary times: hours and minutes local time, as well as universal time.
The 24 time zones displaying universal time are set against a black background if the time indicated is at night, and on a white background during the day time.

Local time is indicated on the two outer rings: one for the hours on a grey satin-finished ring, and minutes on a thin black outer ring. Each time indication has its own hand with a red triangular tip filled with luminescent material. These hands move on two further rings, engraved with key words dear to the Atelier, to display GMT. Finally, an off-centre display at 10 o’clock indicates a second time zone with a blue gold hand. For the caseback of the timepiece, Greubel Forsey opted to keep the disc with 24 time zones indicating the UTC time of the 24 reference cities, but with a rather appropriate modification: the UTC of Paris has been replaced by the city where Greubel Forsey has been established since its early days: La Chaux-de-Fonds, Switzerland.

The beating heart of the timepiece, appreciated by collectors for its remarkable chronometric performance, is a spectacular sight. Once again, Greubel Forsey stuns with its level fine craftmanship. The 30° inclined balance wheel, seemingly suspended in mid-air, is held by a beautiful flat black polished and barrel polished steel
balance wheel bridge on polished steel pillars. To its right, the small seconds, displayed with a blue gold hand completes the ensemble.
The titanium bridges, which serve as the æsthetic backdrop for this horological spectacle, are hand-finished with a steel brush and take on a frosted texture never before applied by Greubel Forsey. The delicate frosted surfaces catch the light and accentuate the globe, which remains the protagonist of the arena.
Finally, the inside of the case is polished so that it mirrors the escapement platform, the Terrestrial globe, and nearly every element visible on the dial side, thus adding incredible depth to this new construction.

This theatrical composition takes place within the signature convex case designed by Greubel Forsey. Made of titanium and with a diameter of
46.5mm around the bezel and 43.5mm around the case band, it hugs the curve of the wrist perfectly. It also represents the major technical feat of achieving a movement that follows an imperceptible slope of just a few degrees. The sapphire crystal and satin-finished bezel follow the same curved geometry, which extends onto either a titanium bracelet or a textured rubber strap.

Greubel Forsey will only make 66 GMT Balancier Convexe timepieces: 22 per year between 2022 and 2024.